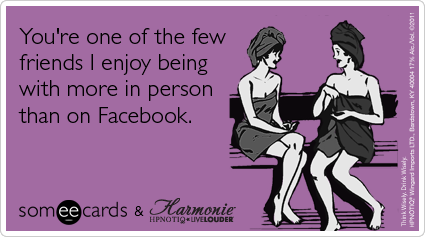 The other day I overheard one twenty-something say to another twenty-something “I have 883 friends”. They were measuring up their Facebook friends. Every fiber in my being wanted to snipe in with “No, you don’t”. I had to collect all of the little will power I have to shut up.

My basic theory: the value of cyber friends seems to decrease as one’s age increases. There is the “networking” value of course, but I still shake my head at the term “friends”. The majority of  “friends” on Facebook seem to be little more than a photo in a box who either clicked on you or clicked “accept” for the sole purpose of bumping up the number of “friends” they have.

It would be amusing to conduct a social experiment with someone who has a friend count approaching 1000. Find a busy intersection, and unbeknownst to them, have some “friends” pass by to see if the person would indeed recognize members of their Facebook posse on the street.

It is possible I have simply fallen behind the times. I have always considered a friend as someone who knows me well enough to remember important dates (say, a birthday) without it being announced over the internet. Isn’t that why calendar apps were created? (snarky!) A friend would also be someone who would acknowledge such an event with something abit more warm and fuzzy than “Dude have a good one”. Perhaps my standards are too high. If I lowered the bar, I could be well on my way to having 800 friends as well.

I do fully appreciate living in a world that appears to be controllable; if we could only have the ability to “block” in real life. A girl can dream!

Facebook does not seem to have cast its spell on teen boy; although it may be a matter of timing. He has none. A full time job, part time job and school do not lend much time for cyber nonsense. “13” (soccer #, not his age) only has time to text & plan for afew fleeting moments with friends around his schedule. For our timeshare, we bait him with food; I do not care if the Department of Natural Resources says this is illegal.

Growing up, we only had real world peer pressure and popularity to worry about. We concerned ourselves with who sat by us for lunch, who played with us at recess, or what boy teased which girl. I can’t help but wonder at the progress we’re achieving.

Now kids go home from all that and still have to deal with virtual popularity as well ? We stand by our decision to not let the girls have Facebook pages. Here’s hoping they have “real” friends.

This blog and it's contents have been copyrighted. I'm not sure why anyone would want to steal it's contents, but I was advised to do so. Apparently there are some not so nice, unscrupulous people out there looking to plegiarize stories about my insanity. Bad form.